Model Overview
There are six different versions of the Mitsubishi Outlander for 2020: ES, SE, LE, SEL, Hybrid, SP and GT. The GT is only available with an all-wheel drivetrain while all other trims can be had in either front- or all-wheel drive form.

The 2020 Mitsubishi Outlander is offered with two different engines: a 166-horsepower, 2.4L 4-cylinder engine, or a 224-horsepower, 3.0L V6. Four-cylinder models utilize a continuously variable automatic transmission (CVT), while shifting in V6 models is handled by a conventional 6-speed automatic. The V6 is only available on GT models.

The layout underneath the Outlander is like that of most crossovers in this class, with MacPherson struts in front and a multi-link rear suspension. An electric power steering system helps provide good weighting and responsiveness while reducing fuel consumption. EPA gas mileage ratings for the 4-cylinder models ranges up to 25 mpg in the city and 30 mpg on the highway.

The Outlander may not present as a hard-core off-roader, but it has enough toughness and ground clearance to get through loose, rocky trails and the occasional forest road. S-AWC models (with all-wheel drive) include an electronically controlled center coupling and an open rear differential. The system is supplemented by an active front differential that helps get the torque split correct between front wheels, which is especially helpful in low-traction situations like ice, snow and mud.

In all models, the second row can fit up to three, and it's 60/40 split, with the seatbacks folding forward for more cargo capability or reclining, and there are adjustments for sliding fore and aft as well. The third row can fit two, and it's split 50/50, with a fold-flat mechanism. With both rows folded, the Outlander has up to 128 cubic feet of cargo space.

High-tech safety come standard on all trims above the SE which include Forward Collision Mitigation and Blind Spot Warning, Lane Departure Warning, Rear Cross Traffic Alert and rain-sensing wipers.
Model Strengths
Seating Space For Up To Seven
Good Fuel Economy From 4-cylinder Engine
Active-safety Options
Smooth Ride
All-weather Capability
Model Changes
The 2020 Mitsubishi Outlander benefits from a variety of changes and enhancements for this year such as a new driver side power lumbar seat and available 8-inch infotainment system. Advanced safety features like automatic emergency braking, lane-departure warning and high-beam assist have also been added to SE and higher trim levels. In addition, Mitsubishi re-tuned its (Super-All Wheel Control) system for even better off-road capabilities.
Model Value
The Outlander is in a crowded field, up against best-sellers including the Honda CR-V, Toyota RAV4, Ford Escape and the Subaru Forester. Against these, the Outlander offers a comparable exterior but manages to pack seating for more people inside.
Interior space and fuel efficiency are both big strengths. Mitsubishi also says that the Outlander is one of the most fuel-efficient utility vehicles offered in the North American market with standard 7-passenger seating (it gets an EPA estimated 30 mpg highway). Furthermore, the hybrid model shows a real commitment to the use of alternative energy offering 22 miles without a single drop of gasoline. 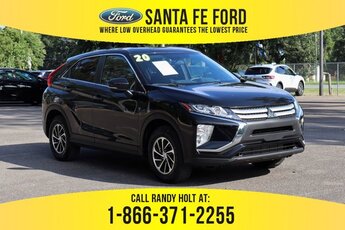