Model Overview
The Explorer is offered in base, XLT and Limited models, and no matter the model, it comes with three well-designed rows of seating and room for up to seven (the second row comes with two bucket seats for adults). While the third row is kid-sized, it's easier to fold than those on just about any other model--thanks to the simple, single-button power-folding system. Parents will also note that LATCH fasteners for child seats are included in the second-row outboard positions. And if you flip both the second and third rows forward, there's a cavernous (and well-shaped) 81 cubic feet of cargo space.

With the EcoBoost 4-cylinder engine, fuel economy is one of the best in this class of vehicle: 20 mpg city and 28 mpg highway. There is one caveat for the EcoBoost engine--it's only available with front-wheel drive, so any shoppers needing the all-weather security of 4-wheel drive will need to step up to the V6. The larger engine isn't all that bad, though, rating EPA ratings of up 17 mpg city and 25 mpg highway.

The 4-wheel drive system in the Explorer is designed with the urban driving done by most Explorer owners, but it does include a Terrain Management system that cleverly recalibrates the system for snow, sand or mud when needed. With 4-wheel drive, there's also Hill Descent Control, to help maintain composure on steep, slippery slopes.

Also of note is MyFord Touch, a touch-screen-based interface that combines a host of vehicle, information and entertainment functions in an interface that appears a bit like that of iPads or other tablet computers. The system works together with Ford's Sync interface to interact seamlessly--and with voice commands--with media players, smartphones and music on USB sticks. 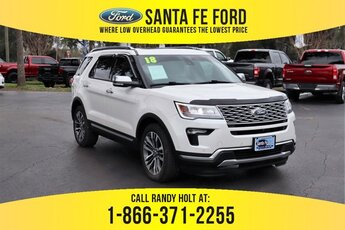